Two things made me think about the music business today, one was a Facebook post by my old friend Trevor Sadler. Trevor is a super-talented mastering engineer and has mastered most of our records and countless others by artists most people would know.

His post in a nutshell was that he needed a “real job” and was sick of the “Music Business,” and that it’s a losing proposition trying to sustain a living at it. This is nothing new to most people involved in any occupation that is based in the arts, and it’s sad. Music and art gives so much to so many and yet those responsible for its creation seem to benefit the least. 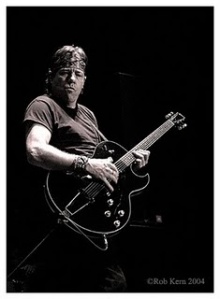 The second thing which made me chuckle was a memory from way back stirred by seeing George Thorogood last week.

It was right after our appearance on Saturday Night Live and we found ourselves in our record company’s office after hours. Our manager at the time was inquiring about how many orders for our record had come in and what kind of stock was on hand to fill them.

The president of said record company sat at a computer that looked like a prop from the movie War Games and with one finger typed a few keys and with much glee said they had over 40,000 orders placed in just one day. Great! How many do you have ready to ship? A few more key punches and the answer was on the screen, thirty. “Thirty thousand,” we asked? “Let me check,” says record company president followed by more clicks, and the answer…”no, 30.”

Looks of fright were shared and it was time to leave but as I looked down next to the desk I saw on the floor a 2-inch, 24-track tape laying outside of its box, the tape half off the reel and tangled like a pile of spaghetti. On the box was written George Thorogood master, “Bad to the Bone.” I had to ask, “Is that “THE” master for Bad to the Bone?” As the most nonchalant “yes” that could ever be spoken reached my ears, I knew then and there that music and business were two words that just didn’t belong together.