USA TODAY says, “… here, the Spanics snap off Fender lines that owe equally to The Beatles’ Revolver and Buck Owens’ The Carnegie Hall Concert, coming off like some lost ’60s garage band with the chops to match its enthusiasm.”

HARP Magazine says, “Spanic Boys are not only Milwaukee’s finest; they’re also one of the most honestly rocking bands in the land.”

No Depression Magazine says, “… Sunshine also finds the family stretching out beyond the roots-rock border. … Wherever these guys take the sound, though, in the end, it still sounds like a Spanic Boys record, each track boasting some truly heroic guitar work …”

Miles of Music said, “The duo shines on “What Will You Do” and “Honey” but every track is a winner. There is a reason they’ve been at this for 20 years.” 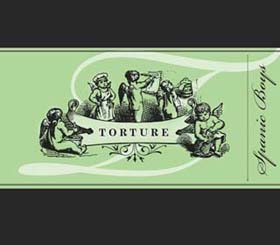 TORTURE is the Spanic Boys’ critically-acclaimed 2001 release, originally on the now-defunct Checkered Past Records. Billboard Magazine said, “Though the music on “Torture” is typically percolating Spanics rock’n’roll, the songs themselves (co-written by Tom and Ian) are darkly affecting, with “The Man Who Hates the World,” “Loser Blues,” and “She’s the Kind of Girl,” among the standouts.”

WALK THROUGH FIRE was released in 1998 on Panic Button Records. Due to the many requests from Spanic Boys fans for something special and collectible we’re pleased to provide here the limited edition Spanic Boys CD release, Walk Through Fire. Each CD in this limited edition is signed by Tom and Ian.

SPANIC FAMILY ALBUM This slight departure from the usual Spanic Boys lineup adds a distinct country flavor to the Spanics’ traditional rock-n-roll. Released in 1996 on East Side Digital Records, this now out-of-print CD showcases the Spanic’s country and rock-a-billy roots. Features tasty steel guitar, a rocking Spanic instrumental and the rockabilly-tinged song “I Can’t Find A Way,” which was featured in ABC’s TV show, The Marshall.

DREAM YOUR LIFE AWAY Released on Rounder Records in 1993. From Rounder, “The Spanics are cutting-edge rockers first and roots rockers second. There is a definable sense of rock history in their songs, but what really cranks their vintage amplifiers is their modernity – their raw sound and imagery. The Spanics are absolutely required listening during this otherwise dim period when rock and roll has given up its birthright, and they burn a sterling contemporary light.” “One of the best albums we’ve heard this year, “from the Chicago Sun Times. “The Spanics have fled the narrow hallway of roots rock. This is a bright and refreshing set that evokes the soul of blues, country and rockabilly without stepping back in time,” from L.A. Weekly, and from the New York Times, “…country-rock sweeter than Almost Home cookies.”

EARLY SPANIC BOYS This was a 1992 re-release on Rounder Records of the Spanic Boys’ first album originally released in the late 1980s on the now-defunct Permanent Records. A rip-roarin’ rocker that blows your socks off! From Billboard magazine: “…melt-in-your-mind Everlys-style harmonies and James Burton-like flash of twin-guitar interplay know you right in the ears … guaranteed to appeal to any roots-rocker.”
BUY IT @ Amazon

STRANGE WORLD The Spanics came into their own with their second release in 1991 on Rounder Records. From Dave Wild, Rolling Stone Magazine, “The Spanic Boys are a truly great rock `n’ roll band in the classic sense, yet there’s nothing remotely backward-looking about the music made by this formidable father-and-son team from Milwaukee. Their songs are not museum pieces; they are startling, infectious pieces of contemporary rock that show just how much can still be accomplished with just two voices, two guitars, and a crack rhythm section.” From Request, “…an understated lyrical sense of humor, and such snappy melodies…” 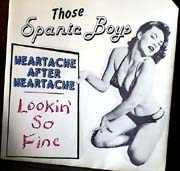 HEARTACHE AFTER HEARTACHE 45 This is the first Spanic Boys recording ever, when they were known as Those Spanic Boys. This vinyl 45 was released in 1986 on Panic Button Records and has not been available since. These 45s were discovered in Ian’s grandmothers basement, and they hadn’t seen the light of day for 10 years! This record features the songs “Heartache After Heartache” and “Looking So Fine,” which are not available on any other release! This is a very rare 45. Cover has a great 50’s pinup.