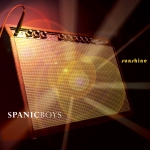 From No Depression: Tom and Ian Spanic, a father-son duo whose rich harmonic blend is as sweet as the Everly Brothers crying in the rain, could pull off a roots-rocking tune here such as “Honey” or “I Hear You Talking” without even breaking a sweat. And they’ve certainly mastered the fine art of coaxing the twang out of an unsuspecting Strat. But Sunshine also finds the family stretching out beyond the roots-rock border.

Take the title cut, a hazy psychadelic rocker that almost comes off as a sequel to the Beatles “Rain,” complete with convincingly Ringo-esque drum fills and a backward guitar solo. “Secret” takes that psychadelic flashback in an even trippier direction, adding Tex-Mex organ, vocals that feel like they come with a lava lamp, and a solo suggesting what Roger McGuinn might’ve played if he’d recorded this one on the morning after “Eight Miles High.”

On “Didn’t Love You Anyway” they rock like a ’60s garage band covering Larry Williams, with a solo as trashy as anything this side of those earliest Kinks hits. Then there’s the Beatlesque ache of “When The Night Has Come,” fueled by the strum of acoustic guitars.

Wherever these guys take the sound, though, in the end, it still sounds like a Spanic Boys record, each track boasting some truly heroic guitar work, from the stately southern rock-meets-Memphis-soul vibe of “What Will You Do?” to the headier psychadelic trip they take on “Secret” and the title cut.

From USA Today: [THREE STARS] Milwaukee father-and-son guitarslingers Ian and Tom Spanic, who’ve performed together now for 20 years, always bring a sense of cross-generational joy to their too-rare releases. Where past discs often sounded like Buddy Holly-era roots-rock, here, the Spanics snap off Fender lines that owe equally to The Beatles’ Revolver and Buck Owens’ The Carnegie Hall Concert, coming off like some lost ’60s garage band with the chops to match its enthusiasm.

Celebrating their 20th anniversary as a band (and 38th as father and son), the Spanic Boys serve up a dozen originals on Sunshine, their eighth album, on their own Cinaps label, with plenty of tasty guitar from father Tom and son Ian.

“What Will You Do,” with guitar-through-Leslie fills, has a Byrds/Burritos feel, while “Secret” recalls Steve Earle, and the title track’s riff and groove sound vaguely like a country version of George Harrison’s “Wah Wah” – that is, if country songs featured backwards guitar solos. “Didn’t Love You Anyway also has a raucous British Invasion feel.

But as rootsy as their sound is, the Spanics are nothing if not original and contemporary. The one formula they wisely don’t deviate from is their tandem lead vocals (dig “I Hear You Talking”) – more proof of those unbeatable genetic harmonies.

From Goldmine: Sometimes perceived as odd and offbeat, Tom and Ian Spanic’s namesake combo has evolved into a terrific group of rockabilly revivalists capable of producing both jittery, rumbling rockers and mournful, lonesome laments … with the title track’s bottom-heavy psychadelia tossed in for good measure. Despite some frayed edges and twitchy insurgency, Sunshine gains accessibility by finding father and son Spanic less frantic.  [Grade: A-]